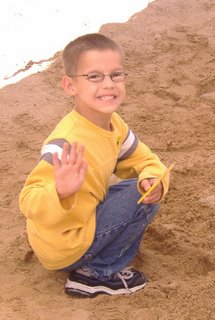 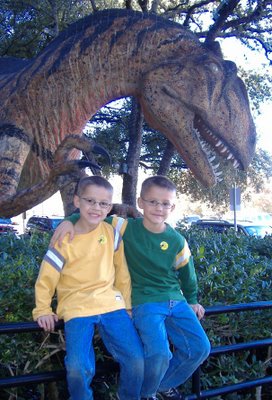 Over the holiday I took my nephews to the Science Museum in Fort Worth. Aren't they cute? And surprisingly brave to pose in front of this very patient dinosaur?

Matthew loved digging for dinosaur bones in the designated sand pit out front. He kept screaming, "Aunt Nicole, I found something!" Every time I would walk over and inspect the rock he was holding and reassure him that, yes, I think he may have been a part of uncovering a very important artifact. The museum is very gracious to allow 7-year-olds to host their own archaeological digs of sorts out front. I'll bet they don't even notice that kids everywhere are taking home pocketfuls of rocks they are convinced belonged to an ancient dinosaur.

If you are in Fort Worth and want to check it out, you too can take home your very own piece of dinosaur bone - or rocks. Whichever ones you are lucky enough to find.

The Coolest Christmas Party Invitation Award goes to...
...Leslie Roberson. She has displayed her party expertise yet again. Check it out. At first glance, it looks like my ipod that got left on the kitchen table... 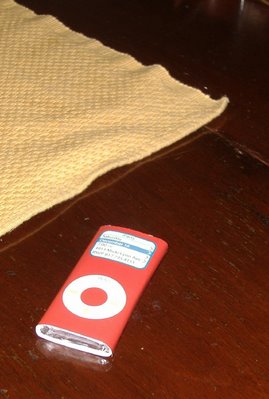 But look more closely and you'll see that it's a party invitation wrapped up in chocolate. I'm telling you, she should copyright this stuff. 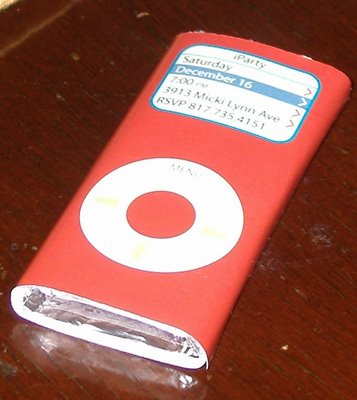 Posted by Nicole at 4:10 PM No comments: 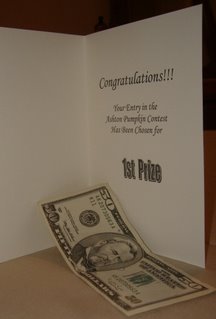 For you faithful blog readers who wondered about the fate of Kelly and I's entry in the pumpkin carving contest - good news! We won. Here's a picture of our reward. We promptly split it up to be used for dinner out or some other unbudgeted entertainment activity. Fantastic!
Posted by Nicole at 4:07 PM 2 comments:

Update: Thursday's court date in Turkey for Hakan and Turan was really to set a more official court date in the future. No date has been set. However, their lawyer said the government does not have a strong case against them. Turan and Hakan were also able to speak freely of forgivenss for those who have falsely accused them. I'll post future updates as I receive information...
Posted by Nicole at 4:05 PM No comments:

Many of you, if you keep up with global news regarding Christian persecution, have heard about a recent case in Turkey. Two guys I worked closely with in Istanbul have been arrested and are facing a trial tomorrow that could result in a prison sentence.

Hakan and Turan, both Turkish and Christian, were charged initially with illegal gun possession (a totally false accusation) and now face three charges: 1)Article 301-Putting down the Turkish republic and inciting riot 2) Article 216-Saying bad things about another person’s religion, 3) Article 135-Gathering and using people’s personal information with out their permission.

Hakan and Turan are working along with other Christians in Turkey to send out Bible correspondence information to people who request it. This is not illegal. Being a Christian is not illegal….but these two were targeted by the local community and the government. They are being charged with offenses that are not true and prosecuted under Turkish laws that have received a lot of scrutiny lately as Turkey vies for EU membership.

The outcome of this case could be a very important factor as the EU watches how Turkey treats minorities. These laws don’t just affect Turkish Christians, they affect writers, artists, and other religious minorities in Turkey. In fact, anyone who might say anything that seems to go against the strong nationalism/Islamic heritage of Turkey can be a target. Several people have been arrested under these laws. If you’d like to read more about the political details of the law and how it affects people in Turkey, check out this wikipedia article.

How should we respond? As people who live in a country where there is freedom of speech and freedom of religion, our first response should be gratitude. Not one of us has to be concerned that sharing our faith will land us in prison in the US. Secondly, if you are a follower of Christ, pray for these brothers and their families. They have displayed tremendous faith and are not worried about their situation. In fact, Turan wrote a recent email that said pray he will face these trials as Paul did, with boldness and faith. The outcome of this trial could affect the Church in Turkey and how Christians are treated in places where Christ is not known. May we recognize our responsibility as the Church to be involved, to pray, and stay informed about what’s going on around the globe.
Posted by Nicole at 10:53 AM 1 comment: