CORPUS CHRISTI, Texas — A Corpus Christi woman says she got something horrifying in the mail.

Police Captain John Houston says police aren't sure which finger was removed or how it was removed, but that the finger appeared to have been cleanly severed and washed.

Police said a letter was enclosed, stating -- quote -- "This is the last chance to touch you."

The 32-year-old woman filed for an emergency protective order from the 34-year-old man last week before receiving the package. Police say the man moved to the Houston suburb of Spring last week and hasn't been located.
=====
Yeah, so I think that's how you know. I guess maybe some would call him a romantic...I mean, I guess he didn't do half bad with the note. But seriously, I'd call it psycho. Remind me to never date a guy missing a finger...
Posted by Nicole at 9:43 PM 2 comments: 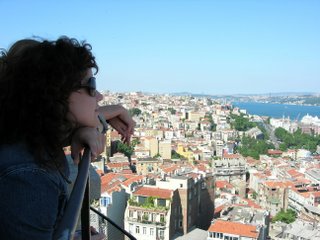 This time of year always makes me think of my summers in Turkey. Oh, how I miss the busy streets of Istanbul, the late night dinners on my neighbor's balcony, and the fruit stands on the way home. It seems like every summer I know someone who gets to travel there (either from CBU or other connections) and I must confess that I am jealous.

This is one of my all time favorite views of the ancient city from the top of Galata tower. A friend snapped it last summer while I was pointing out all the highlights of the city to my friend Deb. (by the way, those are her hands seemingly sprouting out of my profile in this photo)

Friends who are there now:
You simply must go to Galata and see this view for yourself. 360 degrees of pure Istanbul!

Others who have been there:
Remember how fabulous this city and the people are?

The rest of you who haven't been to Turkey:
See what you are missing. Why have you not ventured into this historical Mediterranean heaven?
Posted by Nicole at 4:05 PM 4 comments: